The 2020 UT Social Media Week will be held Feb. 18-20 and features social media and news professionals from near and far, including three CCI graduates. Admission is free for all six sessions, which will take place in the Communications Building. 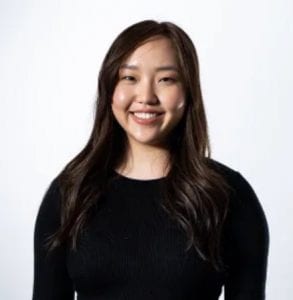 Sookie Park (AD ’13) is the Director of Partnership Activation at Complexity Gaming, one of America’s premier esports organizations now headquartered in Frisco, Texas. She will speak on “esports and Marketing to the New Generation” on Thursday from 11:10 a.m.-12:25 p.m. in Scripps Lab Theater.

A native of Daegu, South Korea, Park entered the traditional sports and esports industry through the Philadelphia 76ers and Dignitas, working with partners including Pepsi, Buffalo Wild Wings, and HyperX. At Complexity, she manages all partnerships by growing relationships with clients and executing activations for the team, fans, and partners such as GameStop, US Army, and Miller Lite.

My workday, without exaggeration, is never the same. Generally, a lot of my days are spent on internal and external meetings and answering emails as the point of contact for all of our brand partners, and making sure our upcoming events/activations are being prepared for a flawless execution. However, when some of our biggest and most important teams and events are being played, everything stops and the entire office is glued to our big TV in the “living room.” Perks of being on an esports team, I guess!

How do you plan and strategize social media coverage on competition days?

It all depends on the tournament and games, but everything starts with our social and design teams collaborating on photoshop templates. Templates are based on the tournament format/games. For instance, bigger tournaments like CS:GO (Counter-Strike: Global Offensive) usually have a set schedule and 90 percent of the time, the team will be featured on the main stream. If that’s the case, we’ll have do a robust coverage consisting of: live in an hour, live now, stream highlights of their best play, funny moments, results, etc.

For smaller scale tournaments, APEX (Legends) for example, a battle royale with a completely different format than CS:GO and we’re not guaranteed to be featured on stream. Sometimes, we’ll get featured, but nothing impactful happens so a highlight won’t be posted and coverage will be a simple — live now and end of day result.

It’s one thing to tweet for yourself and your ideas, but how do you develop a voice for your company’s social media platforms?

We have social guidelines that align with our company brand guidelines to ensure that our voice is consistent!

Why did you choose the University of Tennessee – and CCI in particular – as a student?

I’ve always wanted to study advertising and sports marketing since I was about 12 years old! When the time came for me to decide on a university, I wanted to go not only go to a school that had a stellar advertising program, but also was located somewhere that I would’ve never thought of going to. As a kid who grew up in Minnesota/Korea, Tennessee seemed like a place that would take me out of my comfort zone and would give me the opportunity to experience a new culture that I’ve never experienced before!

What are some skills you learned or experiences you had at Tennessee that have helped you on the job?

The biggest thing I learned in class was how to prepare pitches and decks! That is such an invaluable skill in account management, and as tough as that campaigns class was, it has given me so much experience in a short amount of time.

What advice do you have for students interested in going into social media professionally?

I think not just in social media, but in general, you need to figure out your brand and be active with that voice on social media, just like any brand should be doing on social media. It can be an extension of your personality, or it can literally just be about a specific topic that you are passionate about! But developing that persona is super important. Also, know what social media you should focus on for the industry that you want to be in. For the esports industry for example, Twitter is probably the biggest platform – so I’m literally on it every waking moment, catching up on news, interacting with industry folk, and excessively tweeting.