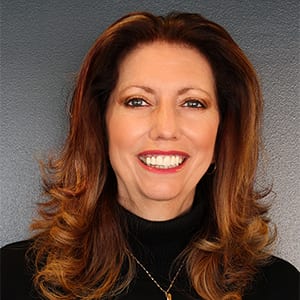 Robyn Blakeman received her bachelor’s degree from the University of Nebraska in 1980 and her master’s from Southern Methodist University in Dallas, Texas, in 1996.

Upon graduation in 1980, she moved to Texas, where she began her career as a designer for an architectural magazine. She next took a position as mechanical director for one of the top advertising agencies in Dallas before eventually leaving to work as a freelance designer.

Professor Blakeman began teaching advertising and graphic design in 1987, first with the Art Institutes and then as an Assistant Professor of Advertising teaching both graphic and computer design at Southern Methodist University. As an Assistant Professor of Advertising at West Virginia University she developed the creative track in layout and design. She was also responsible for designing and developing the first Online Integrated Marketing Communications Graduate Certificate and Online Integrated Marketing Communications Graduate programs in the country. While at West Virginia University she held several positions including: Advertising Program Chair, Coordinator of the Integrated Marketing Communications Online Graduate Certificate Program and Coordinator of Student Affairs and Curriculum.

In 2002 and 2004 Professor Blakeman was nominated for inclusion in Who’s Who Among America’s Teachers. In 2003 she was included in Who’s Who in America, and in 2004 became a member of United Who’s Who. Additionally she has received the Kappa Tau Alpha honorary from her peers and was voted journalism professor of the year for 2001-2002.

She has published two texts, The Bare Bones of Advertising Print Design, and Creative Strategy for Integrated Marketing Communications. Professor Blakeman currently teaches design at the University of Tennessee in Knoxville.