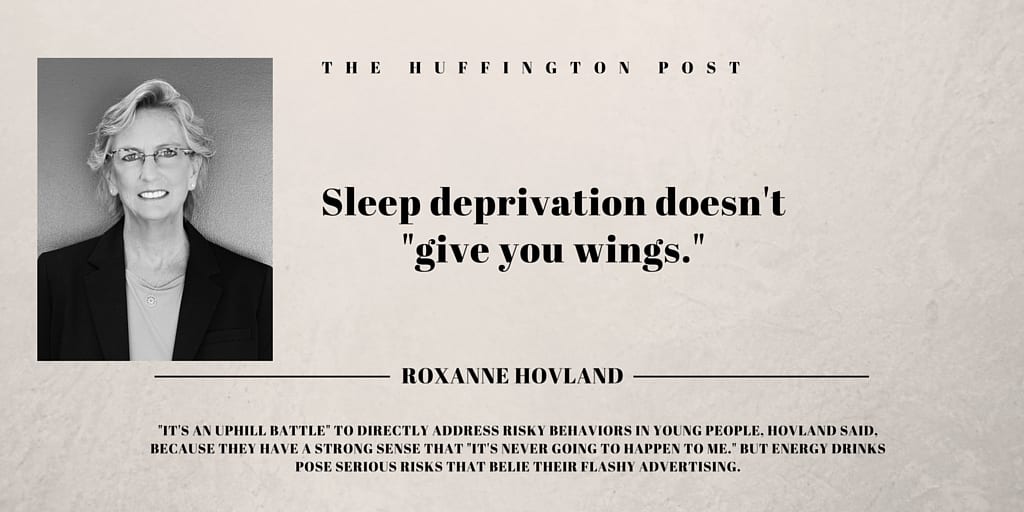 Advertising Professor, Roxanne Hovland was featured on TheHuffingtonpost.com regarding her opinon on Red Bull and it’s effect on college students. Below is an excerpt from the article, or the full article can be found at http://www.huffingtonpost.com/entry/red-bull-campus-ads_564cd487e4b08c74b733d618.

College students are notoriously sleep-deprived. A 2010 study published in the journal Sleep and Breathing found that only 42 percent of students “expressed satisfaction with their sleep.” The health risks of poor sleep run the gamut from decreased immune function to impaired work performance, but you don’t need to tell that to most students, who know all about it firsthand. So let’s be clear: telling students they don’t need sleep may serve Red Bull’s interests, but it’s a message that, when taken to heart, can have damaging effects on young people’s health and academic performance.

Red Bull’s famously exuberant marketing has taken many forms over the years: stunts like launching a skydiver from the edge of space, owning an entire Formula One team, and flooding college campuses with product and “brand representatives.”

It works. A 2008 study found that 39 percent of college students had at least one energy drink in the last month.

Red Bull, which is valued at $6.5 billion and commands 43 percent of the white-hot energy drinks market, is as synonymous with energy drinks as Kleenex is with tissues. Considering how poorly it does in taste tests, that’s doubly impressive. It’s not really taste that Red Bull sells, but a promise: “Red Bull Gives You Wings.” And it’s one that is particularly appealing to time-crunched college students facing both academic and social pressures.

But its success raises questions as to the public health obligations of for-profit companies.

Dr. Roxane Hovland, a University of Tennessee at Knoxville professor who specializes in advertising regulation, says the ethical gray area is tricky to navigate because the FDA can’t regulate energy drinks the way it does other potentially unsafe products like alcohol and tobacco. Unlike its rivals Monster and Five-Hour Energy, which are considered dietary supplements, Red Bull markets itself in the category of “conventional beverages.” As the New York Times reported in 2012, “while producers of energy drinks that market them as dietary supplements… must notify the F.D.A. about death and injuries claiming a possible link to their products, companies that market energy drinks as beverages do not.”

“Just as with other potentially dangerous products, we have warring impulses as to their marketing,” Hovland told The Huffington Post. “On one hand, we want to be protected from unscrupulous marketers, but on the other hand, we are a country of individualists who… often resent the intrusion of government into private decisions.” So the onus placed on university administrators to mediate energy drink marketing on campus is quite tricky.

What’s worse, said Hovland, university administrators can’t openly criticize companies because they risk claims of defamation. She suggested, as one solution, that they issue cautionary messages to combat the aggressive marketing.

When reached for comment, a Red Bull PR representative said, “We never talk about our marketing practices.”

Red Bull posters on campus promote the drink as a study aid for industrious students. “Ideas don’t respect office hours,” says one whimsical cartoon. And the tagline about nobody wishing they’d slept more in college was being tweeted as far back as 2011, which suggests the message has resonated with its audience.

“It’s an uphill battle” to directly address risky behaviors in young people, Hovland said, because they have a strong sense that “It’s never going to happen to me.” But energy drinks pose serious risks that belie their flashy advertising.

Emergency room visits related to energy drinks in the U.S. doubled to 20,783 between 2007 and 2011, and 10 percent of these were serious enough to require hospitalization, according to a 2013 report from the Substance Abuse and Mental Health Services Administration. Worse, 34 deaths have been linked since 2004 to energy drinks.

Then there’s the truly inadvisable combination of energy drinks and alcohol. While part of Red Bull’s campus marketing promotes it as a supposed study aid, the other part suggests its use as a party aid. Red Bull brand ambassadors bring cases of product to social organizations and events on campus to promote its “off-label” use alongside alcohol. The CDC warns that this pairing encourages binge drinking and even increases the incidence of sexual abuse. And its risks aren’t even fully understood yet, since energy drinks haven’t been around very long.

Given all this, it’s high time for a second look at the marketing of energy drinks on campus. Knowing their full risks should give anyone a sleepless night.