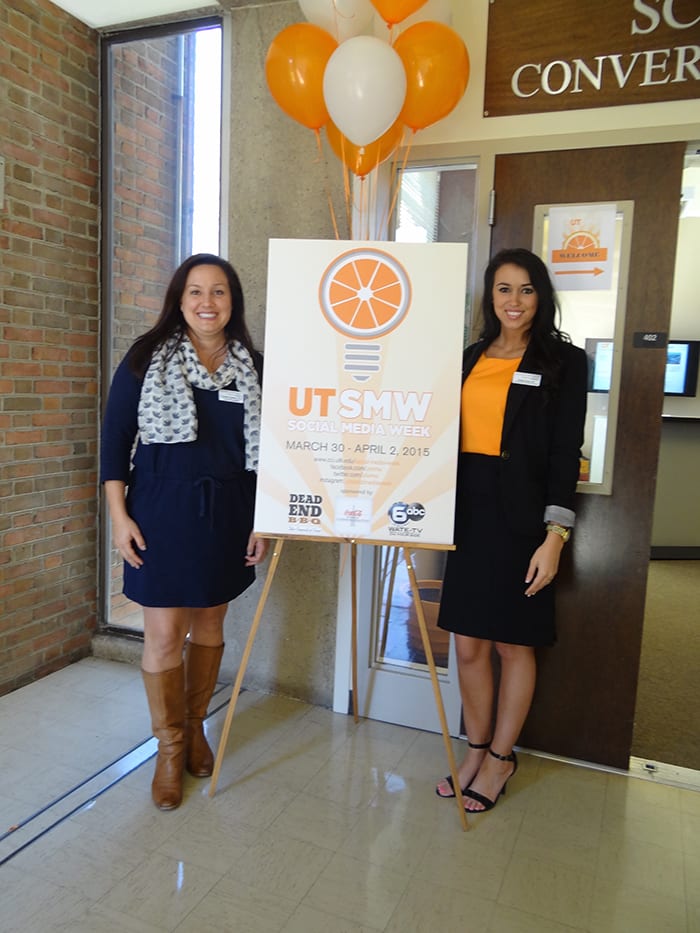 Social Media Week started as an opportunity to have established professionals come to UT and speak to students about how social media is used in the workplace. It has since evolved into a week where students can interact with knowledgeable experts in the field of their major such as: Communications, Public Relations, Advertising, Marketing, and Journalism.

UTSMW15 consisted of a wide-variety of speakers from nonprofits, athletics, and entertainment. Nineteen social media experts participated as speakers or panelists; six were UT alums and six participants traveled here from across the U.S. Panelists from Facebook, Sports Illustrated, WATE 6, Turner’s Headline News, and our very own UT Head Football coach joined us this year to exhibit the true power behind social media.

Our diverse group of speakers disclosed no matter what field of work you are interested in, social media is a growing and evolving dynamic that will soon play a role in all jobs. The sessions demonstrated to our audience that whether you are starting your own consulting firm, branding yourself, or representing a business, YOU have an impact on your image. One must always think about how they want to be perceived by others. Anything that is posted on the Internet can be used either for or against you.

As students, especially graduating seniors, this was an opportunity for them to see what it is like transitioning from college to the real world.

Attendance for the event was free. Sessions were live steamed on the official UTSMW 15 channel. Archived sessions are available via the YouTube channel: https://www.youtube.com/channel/UC3ye4oyG-BS6U2Y0rcUgFkA.  Although it was not the first year to have Live Streaming, there was an increased amount compared to previous years.

Social media played an incredibly large role in our week.  We reached a larger audience and had more interaction through twitter by live tweeting during the event. A majority of our promotions were through Twitter, Facebook, and Instagram. On Twitter alone, the special event hashtag of  #utsmw15 reached 470,365 accounts and generated 2,871,338 impressions. There were over 911 tweets that featured #utsmw15 from March 30 – April 5, 2015.  (Source: TweetReach.com)

Thank you to everyone who made this week a success. We would like to especially acknowledge Coca Cola, WATE 6 On Your Side, and Dead End BBQ who were our official sponsors for the week. We are thankful and excited for the success of this year, and look forward to the growing possibilities for the future. For more information about this year’s event: www.utsmw.com, https://www.cci.utk.edu/smw/videos, and https://www.cci.utk.edu/video-library.