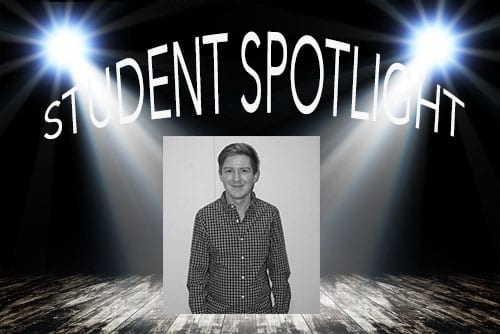 All About Steven Woods

Steven is a Knoxville, TN native and is currently a junior at UT.

He came into the University as an undecided major, but knew he wanted to pursue a career in either Communications or Business based on his high school classes and clubs he participated in. He spent his first year meeting with professors, advisors, and career services before finding out what he wanted to do with his life. It worked out for Woods in the end, because it led him to take Dr. Haley’s ADV 250: Introduction to Advertising class.

After a semester of Haley’s entertaining and thought- provoking lectures, he knew advertising was where he belonged.

What is his favorite part of the major? Easy, the faculty. He never wants to miss class, even for snow, because if he does, he fears he loses the opportunity to learn from the professors who know first hand what it takes to make it in the industry. Steven mentions, “They are always willing to drop everything to help students, whether it’s with career advice or how to write a business strategy. Not to mention, they are the sole reason why this is one of the best advertising programs in the country.” He now majors in Advertising and dual minors in Business Administration and Psychology.

He said it was difficult to choose one professor as his favorite considering they have all been essential to his education. When narrowing it down to two he chose Dr. Haley and Professor Blakeman. Dr. Haley has served as a mentor to Steven and he feels as though he has learned a lot from him. As for Professor Blakeman, he always leaves her class feeling like his, “brain expanded from learning,” but also exhausted due to her “high energy and information packed” lectures.

Having only completed three classes, his favorite so far has been the Advertising Design class. He enjoys the opportunity to create portfolio pieces such as: newspaper ads, magazine ads, brochures, and invitations. He also loved his end of semester project where he created a style guide for the organization of his choice.

Steven aspires to work in account management for a prestigious advertising agency in a large city such as New York City or London.

Along with having a 3.93 GPA, he works at the Daily Beacon, where he designs both ads and editorial content to be printed in the school newspaper.

Fun Fact: Summer of 2014, he studied abroad at the University of Cambridge and is now obsessed with English culture.