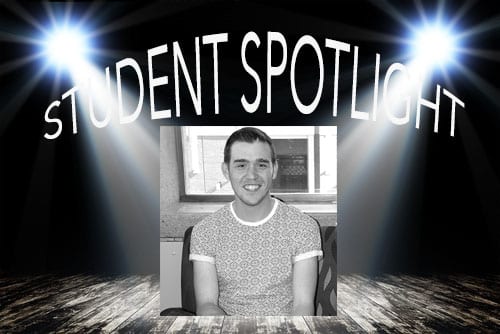 Hathaway is a Senior and pursuing a career in account management within an advertising agency.  From a young age Hathaway has been interested in advertisements placed in magazines and commercials.  He would always take his mom’s magazines and stare at them for hours.  Little did he know they would spark an interest for the rest of his life.

He chose the UT School of Advertising and Public Relations, because it is considered one of the top in the nation. He says that it also has a great reputation within the industry.  The networking opportunities for Hathaway are top notch here at the University allowing him many opportunities for a successful career. His favorite part about the school, “The faculty of Course!” He says they are honestly the greatest.  He also says, “they do everything they can to ensure information, contacts, advice, and career opportunities.”  They are very down to earth and he can carry on conversations with them and never get bored.

He likes all of his professors, but when asked to pick his favorite he said it would be a tie between Dr. Haley and Professor Blakeman.  Both of the professors have been stepping stones for Hathaway’s success.  They don’t just give him classroom advice, but they also give him life advice.  He is around on Tuesdays and Thursdays always talking to them in their offices.  After careful consideration he declared his favorite class so far to be account planning.  He says, “Even though I want to go into account management, I think figuring out how the target thinks and feels about a brand and then formulating a strategy based off of it is so interesting. It’s like playing a game!”

Hathaway is a leader in the classroom and well- respected by his professors. We have no doubt he will be successful.

Fun Fact:  He used to be involved in an activity called Winter Guard International and made World Championship Finals.